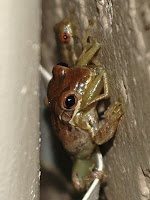 thingfish23 over at Due for a Turnover is blogging about the Cuban tree frogs (Osteopilus septentrionalis) that are taking over his house in Florida, Ten Commandments style:

"These are ALL Cuban treefrogs. They are ALL invasive. I don't have enough BB's for ALL of them."

Do head over there to see all of the photos. (Thanks to tf23 for letting me post the one to the left.)
Posted by Jennifer Forman Orth at 12:28 AM 1 comment:

Maine Today is reporting that state wildlife officials shocked and netted a three-pound koi (Cyprinus carpio) in Pickerel Pond last week. The fish was just one of at least two individuals spotted in the pond earlier this summer. No one knows how the koi got there, but faithful ISW readers and those Mainers in the know will recognize this as the very same pond whose claim to fame is the first and so far only occurrence of the invasive aquatic plant hydrilla in the state of Maine. What's next, snakeheads :-)?

Posted by Jennifer Forman Orth at 9:38 PM No comments:

The Reno Gazette-Journal is reporting that game wardens in the state of Nevada, having spent the past several weeks tracking down African clawed frogs (Xenopus laevis) illegally imported into the state, have discovered the source of the frogs: a Florida company called Grow-a-Frog. The company sold almost 200 of the frogs through its online store to Nevada residents before the mistake was caught (the owner claims he knew it was illegal to sell the frogs in Nevada, but there was a error made at the shipping facility). Since the discovery, the Nevada Department of Wildlife had fielded numerous calls from citizens who had received the frogs. Others who have more information are being asked to call 1-800-992-3030. African clawed frogs and regulated in Nevada (and in other states) because of concerns about them establishing in the wild and also because of the possibility that they could be a vector for the amphibian-killing chytrid fungus (Batrachochytrium dendrobatidis).

The invasive species world will likely be buzzing about this New York Times article (if they force you to log in, try bugmenot) pointing out that introduced species very rarely lead to native species extinctions. Read the NYT version and discuss amongst yourselves, or go whole (feral) hog and devour the original research article, available for free in its entirety (and free from the creepy illustrations in the NYT article), brought to you by the Proceedings of the National Academy of Sciences.

A teenager in Arkansas is nursing a broken jaw after he was struck by a silver carp (Hypophthalmichthys molitrix) while riding around a local lake in an inner tube (the inner tube was being towed by a speedboat). While this might strike some of you as odd (and painful), those of you who are familiar with the tendency of the Asian carp to jump out of the water when startled are likely not surprised. The Arkansas News Bureau has the full story.

Posted by Jennifer Forman Orth at 11:40 PM No comments: 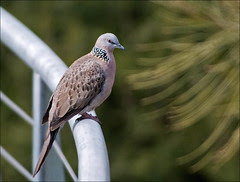 Nice shot of a spotted turtle dove (Streptopelia chinensis) in a park in Australia. As its scientific name indicates, this species is native to China, but it has been introduced all over the world, from California to New Zealand, Australia and Indonesia.

The Africa Science News Service is reporting about a threat to the wildlife in Kenya's nature reserves caused by the invasive Mauritius thorn (Caesalpinia decapetala). Also known as "cat's claw," this thorny leguminous shrub is poisonous to the large herbivorous mammals that roam the country's parks. It also forms thickets that block access to the good vegetation that animals like giraffes count on for sustenance. Unfortunately, according to the article, attempt at controlling the invader have so far failed.

Posted by Jennifer Forman Orth at 11:16 PM No comments:

The ISW twitters breaking invasive species news. Want to be the first to know when something bad shows up? Follow the feed.

Posted by Jennifer Forman Orth at 11:06 PM No comments:

The Reno Gazatte-Journal is reporting that Lake Tahoe had a near miss last week when a boater showed up with quagga mussels (Dreissena bugensis) on his vessel. The boater's last stop: Lake Mead, site of the fairly infamous first known occurrence of quaggas on the west coast. The boat was apparently decontaminated when it left that lake, but that did not dislodge the mussels attached to the boat's stern. Though officials in California are hoping the hot water treatment killed the mussels, that did not stop them from placing the boat under quarantine until they can be sure it is safe.

Posted by Jennifer Forman Orth at 11:44 PM No comments: