Posted by Jennifer Forman Orth at 7:11 PM No comments:

The National Environmental Coalition on Invasive Species (NECIS) has just published "An Action Plan on Invasive Species" aimed at effecting change in the policies set by both Congress and the President of the United States regarding invasive species. Specifically, NECIS, which is comprised of 17 different non-governmental organizations, is asking for the following five actions to be taken:

They're not asking for much, are they? :-) Want to learn more? You can download the full report here.

(Thanks to a member of the ALIENS-L listserver for posting a link to this story.) 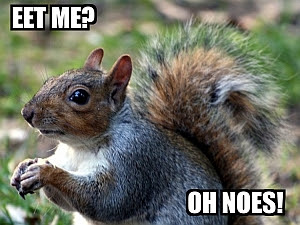 Britain is apparently trying to eat its way out of a grey squirrel (Sciurus carolinensis) invasion, according to this report from the New York Times. Squirrel has become a very trendy option at butcheries, and restaurants have been serving up such dishes as "Squirrel, Peking Duck-style" and, of course, Squirrel Pasties. As the interest in cooking and eating gray squirrel in the UK appears to be driven by popular culture, the movement is not likely to contribute to its eradication, but may perhaps raise awareness about this invasive species.

If this kind of cookery piques your interest, you'll want to click over to the NYT's companion article about preparing squirrel.

Tip of the virtual hat to Michael K. for sending in a link to this story. Original of the photo above by law_keven via Flickr (CC-licensed)

Posted by Jennifer Forman Orth at 1:31 AM No comments:

The Northern Star has an interesting story about local residents in Lismore, Australia taking the fight against the myna bird into their own hands. Indian myna birds (Acridotheres tristis, also "mynah" bird) are aggressive towards Australia's native bird populations, frequently scaring them out of nesting sites. While they like to hang out near garbage dumps and other waste areas, in recent years they have been spreading into agricultural areas, where they damage crops and can spread disease. In response, the town of Lismore now offers its residents free traps to help get rid of them - so far more than 200 birds have been captured.

The ISW 2009 Wall Calendars are threatening to become irrelevant. I've knocked a buck off the price (hey, I only make $2 per calendar so there's not a lot of markup to work with). As always, I donate all proceeds I get from Cafepress to non-profit organizations doing work with invasive species.

Posted by Jennifer Forman Orth at 2:24 AM No comments: