Now the authors of the study have gone on to make a series of recommendations for how bird lovers around the world can keep noxious weeds out of their bird seed and out of their yards. For example, something simple, like checking below bird feeders for odd new plants. But given the propensity of birds to grab seeds and flee the scene, the advice to seek heat-treated seeds may make more sense. A full list of suggestions can be had in this press release from the Weed Science Society of America, along with a list of ten of the thirty seed contaminants found in the study.

The ISW first posted about the issue of bird seed contaminants in Oregon back in early 2007.

There was an interesting new study published in last month's Frontiers in Ecology and the Environment regarding the propensity for man-made reservoirs to act as, well, reservoirs for aquatic invasive species. Researchers looked at five well-known invaders in the Great Lakes region: Eurasian watermilfoil (Myriophyllum spicatum), zebra mussels (Dreissena polymorpha), spiny water fleas (Bythotrephes longimanus), rainbow smelt (Osmerus mordax), and rusty crayfish (Orconectes rusticus). They found that the reservoirs and other man-made impoundments not only hold more invaders than natural lakes, they also increase the risk of invasive species being introduced to those natural lakes. The University of Wisconsin has a press release on the topic, or you can download the full research article.

Posted by Jennifer Forman Orth at 2:25 PM No comments:

According to this story in the Worcester Telegram, a wild boar (Sus scrofa, feral pig) was discovered along a highway in Massachusetts earlier this week. A police officer found the animal, which was seriously injured (presumably struck by a vehicle), and a decision was made to euthanize it. This is only the third record of a wild boar ever found in the wild in Massachusetts. States with established populations include California, Florida, Pennsylvania, and Texas.

Tip of the virtual hat to Universal Hub for posting a link to this story. Additional coverage is available from the Boston Globe.

Posted by Jennifer Forman Orth at 8:36 PM No comments: 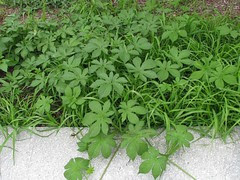 I remember passing by this plant in Boston this past spring and just stopping and staring. The vine had pretty much taken over the raised bed it was in, except for the tree in the center. First time I have ever seen the invasive Japanese hops (Humulus japonicus), live and in person, and it was in the middle of one of the most pavement-locked parts of the city. Not sure how it got there, but the bed was cleared a few weeks later and the hops didn't come back (it's an annual plant).

Interesting article at the Environment News Service about the introduction of Turkestan cockroaches (Blatta lateralis) to the Southwestern USA. The vector for these creepy crawlies? Turns out they often hide in gear brought back by soldiers serving in the Middle East. This article in The Guardian notes that the insects have been hitching rides into America since the Gulf War in the early 1990s. To make matters worse, there has been a rise in the number of folks buying exotic roaches over the internet in order to raise them for lizard food, risking the accidental escape of several other non-native roach species. Yech.

Posted by Jennifer Forman Orth at 8:06 PM No comments:

Chuck over at Lounge of the Lab Lemming sent in a link to his recent pondering of the oddity that is the Australian feral camel (Camelus dromedarius). Introduced in the late 19th century, the camels have no natural predators, and are now being kept in check by human-designed population controls. The ISW has pondered this same topic several times before, but never live and in the flesh as Chuck has done. The ISW never arrived at the concept of camel curry either. Hmm...

A while back the ISW featured a post about a USGS study that predicted the potential range for the Burmese python (Python molurus bivittatus) encompassed the entire southern third of the USA. Now a new study published in the journal PLoS One disputes those claims, concluding that the range of the snakes is not likely to expand beyond Florida. The second team of researchers, from the City University of New York, claim the USGS study is faulted and that global warming will actually *shrink* the suitable American habitat available for the pythons. Want to know who to believe? Decide for yourself: check out the CUNY paper here, and the USGS paper here.