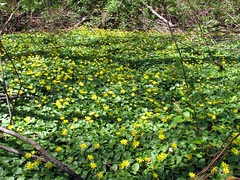 While out at Forbes Woods in Milton, MA last week, lesser celandine (Ranunculus ficaria) was ubiquitous in many parts of the forest. In two areas it completely dominated the understory - one of those two places is pictured here. Lesser celandine requires a moist habitat to thrive, so it's less likely to be found in the highly disturbed urban and suburban areas you typically see other invasive plants.

Lesser celandine spreads by tubers as well as by seed, so a lot of the plants in this photo are likely clones of each other.

Either way, this is one massive invasion!

Posted by Jennifer Forman Orth at 11:11 AM