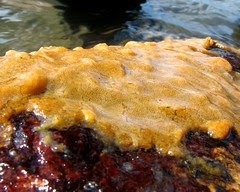 Earlier this week I had the opportunity to go on a field trip to a Cape Cod beach, where the tide pool was filled with invasive creatures (you all were getting bored of the terrestrial plant photos, weren't you? :-)).

This is the colonial tunicate known as Didemnum, first discovered invading Georges Bank back in 2003. Back then they were calling it Didemnum vexillum but scientists have since called the taxonomy into question. In the past several years Didemnum has been found along both the east and west coasts of the U.S. and Canada, and the consensus is that it has spread quite rapidly.

Didemnum prefers hard substrates, and will grow over most anything in its path. The photo you see here is the underside of a rock in the tide pool - the tunicate colony starts on the bottoms of rocks and spreads upward.