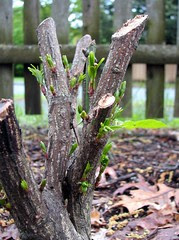 Down, but not out for the count
Originally uploaded by urtica.

Last month I chopped two of my dwarf burning bush plants (Euonymus alata var. Compacta) down as far as my stem cutter would allow, and planted native chokeberry (Aronia arbutifolia) in its place. I left the burning bush to see what would happen (Last year I similarly attacked one in our woods and then squirted Round-up on the cut stems. While the plant died, I was never really positive that it was the Round-up that really killed it.).

Now, over 4 weeks later, as you can see in this photo, these plants are raring to grow. The Round-up is coming out as soon as Massachusetts gets a nice sunny and wind-free day, which I am sure will happen some time before July :-).

A ban on importing burning bush into Massachusetts goes into effect this July, and the sale of this species will be banned after Jan. 1, 2009. As of right now, all cultivars and varieties are included in this ban.

I too have been skeptical of the painting of roundup (glyphosate) on the cut stems. From what I know of glyphosate's action on photosynthesis and its lack of systemic transport I just don't see how it would work to kill the roots. But there's so much anecdotal evidence of doing and recommending the painting (however much less anecdotal evidence of the results a year later), that it's hard to refute.

Aronia arbutifolia is a great choice! Unfortunately a whole host of buggers including Euonymus spp, Eleagnus, and Ligustrum are still being sold in Georgia. (There's a whole nursery devoted to maintaining the cuttings of the UGA Sanford Stadium "hedges", which are privet, and they sell it enthusastically to Georgia football fans who want a little piece of the hedge for themselves!)