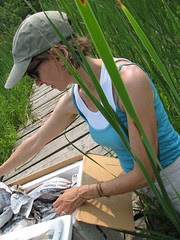 Unpacking
Last Wednesday I headed out into the field to help out with the Massachusetts Purple Loosestrife Biocontrol Project, headed by Beth Suedmeyer of the state's Wetland Restoration Program. Galerucella beetles are currently being used in many parts of the USA to control populations of the invasive wetland plant purple loosestrife (Lythrum salicaria). The beetles, which were discovered in loosestrife's native range of Europe, were selected for rearing here in the USA because of their propensity to dine almost exclusively on purple loosestrife. Massachusetts has had an active beetle release program for several years now (see this ISW post describing my visit to a project site with Fred SaintOurs, back in 2004).

In exchange for helping collect data from the monitoring plots, I got to oberve, photograph insects for the Life on the Purple Loosestrife project, get stung by a giant buck moth caterpillar(!), and see 7,500 Galerucella beetles get released in a wetland in Cutler Park, located along the Charles River in Dedham, MA. 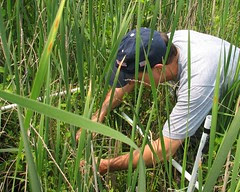 Monitoring
Damon Carter, from the Charles River Watershed Association's Stream Team, was also there to volunteer his time. Here he is investigating a one meter square plot, checking for signs that the biocontrol beetles from last season are making an impact on this season's purple loosestrife (Lythrum salicaria). We also looked at abundance and cover of purple loosestrife, native cattails (Typha sp.), and the presence of other plant and insect species. 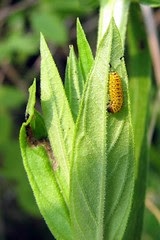 Galerucella are in the leaf beetle family (Chrysomelidae) and will munch on any of the above-ground loosestrife vegetation. To the right is a Galerucella larva that Damon found on the back of a purple loosestrife leaf - he found egg clusters as well. The presence of larvae and eggs is a good indicator that the beetles released last year are reproducing in the wild. 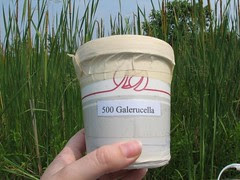 *NOT* Ice Cream!
The 7,500 beetles slated to be released in Cutler Park were packed in ice cream containers filled with straw, and stored in ice packs to keep the beetles calm and cool on an excessively hot day(95'F, a new record!). 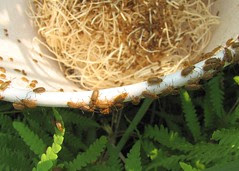 Beth set the buckets inside a few big patches of purple loosestrife and set the beetles free. The sight of two thousand beetles streaming out of a big bucket is pretty cool :-). Most of them headed upward (away from the bucket and probably towards the sunlight) as fast as they could. 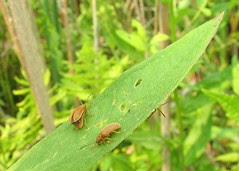 Freedom!
No one is really sure what happens to the Galerucella after they are released. Many are probably carried away in flight by the direction the wind was blowing. Others hang out in the area where they were released - if there is purple loosestrife around. These three beetles seemed to be stopping for a snack. 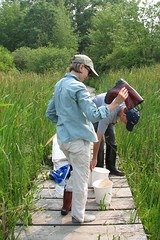 When all the Galerucella had emptied out of their containers, it was time to pack up and head home...but not before checking our boots and clothes for wayward beetles. Field workers and volunteers will return to check all the plots at the site again this fall.

I actually got some good videos of these little critters.. here's one of them :
http://tinyurl.com/yqx7vh

there are a couple more here if you scroll down :
http://tinyurl.com/2josej

Mine aren't 'done' yet.. hopefully next week and then they can be released :)

fuzzy!!!! Those videos totally rock! Keep me posted on your progress, and don't forget to take photos for the Life on the Purple Loosestrife project! :-)

Will do! It's really a fun project and so little work.. the beetles do the hard part! :)

For the 2josej one, I get a private - login message.