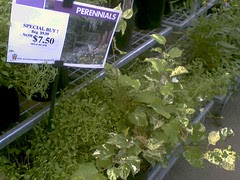 Yesterday I was walking through the garden section at the local Home Depot when I suddenly recognized something I should not have been seeing: Japanese knotweed! There were at least two pots of this variegated Japanese knotweed cultivar (often sold as "Fallopia japonica 'Variegata'"), and neither of them were labeled with any information other than "perennial" and the Connecticut nursery that they originated from.

Why is this a big deal? Well, here in Massachusetts, Japanese knotweed is one of over 100 invasive plants whose import and propagation has been banned since January 2006. The ban includes any cultivars and hybrids.

Some of you are probably wondering why I didn't just complain to the manager and try to get them removed on the spot. My reasoning is that there are bigger issues here:

I have contacted someone that works for the state and will update this post as I find out more about what can be done.

P.S. - Those of you who are interested in Japanese knotweed and also dabble in photography should consider joining the Life on the Japanese Knotweed photo documentation project. Last year's Life on the Purple Loosestrife was a resounding success!

Update 08/17/2006: The Massachusetts Department of Agricultural Resources sent someone out to the Home Depot to inform them of the problem and issue a "stop sale," but they could not find the plants in question (they were probably sold). They also contacted the Connecticut nursery from which the plants originated from. The nursery indicated that they had sold the variegated knotweed plants to several Home Depots under the synonym "Fallopia japonica" and did not believe it was on the prohibited list for Massachusetts, which lists Japanese knotweed as "Polygonum cuspidatum." The nursery will be getting a "stop sale" order as well...and hopefully will decide to educate themselves more about the plants they shouldn't be selling!

Posted by Jennifer Forman Orth at 11:47 AM